Review of The Young Unicorns by Madeleine L'Engle 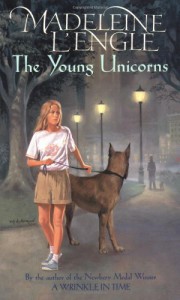 The Young Unicorns by Madeleine L'Engle is the third book in the Austin Family series. After moving to New York city, Dr. Wallace Austin begins research on a new device that will pave the way for major advancements in the field of medicine. Though he is unaware of this, there are those that would want to misuse this technology and his children are put at risk by people who want to get their hands on it. One friend to his children finds himself caught up right in the middle of this conspiracy with both sides vying for his assistance. He's not sure who to trust and by the time he figures it out, it may be too late.

This book is mainly a mystery thriller with some light science fiction mixed in and I thought it was an ok read. I think I did enjoy it more than the first two Austin books, though those two were more realistic fiction. It's not necessary to read the first two Austin books before reading this one unless you want some background on the characters. This book does connect with The Arm of the Starfish though and has a bit of character crossover so I'd recommend reading that book first, but again it's not entirely necessary. This book is in fact very similar to The Arm of the Starfish. Both books feature the head of the family making some sort of scientific breakthrough that ends up putting their family at risk as well as the world at large and someone connected to the family ends up caught in the middle of it and playing a major role. I should note that there aren't any actual unicorns in this book or anything in the book that would give me a clue as to why it was titled the way it was.