Review of Men at Arms by Terry Pratchett 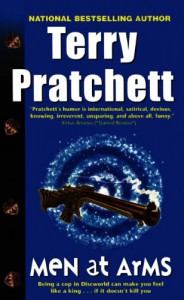 Men at Arms by Terry Pratchett is the second Discworld novel featuring the Night Watch of Ankh-Morpork. There is a string of mysterious murders and the victims were killed by a strange new weapon. It's up to the Night Watch to investigate these murders and figure out how they were killed and by whom, all while the captain of the Night Watch is getting married and retiring and new recruits are being trained. This was quite a humorous murder mystery novel and I think I liked it somewhat better than the first Night Watch book, Guards! Guards!. This book takes place after Guards! Guards! and while it's not strictly necessary to read that book first, it does provide background on the characters.